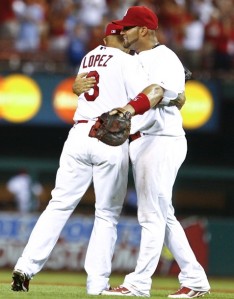 Third base for the St. Louis Cardinals is still a major concern. With the excitement of the Reds series, a return to first place, and a recent offensive upward surge by the Cards lineup, the third base issue has been obscured by a bevy of runs and an energized, motivated team.

But it’s still a concern…a looming concern that will soon demand a resolution.

In his last 43 at-bats (last 10 games), Felipe Lopez has 7 hits, 2 RBIs, and 8 runs scored from the lead off spot. He’s hitting .163 in that time frame. Combine that with reports and whispers that Lopez is dealing with a still-lingering elbow issue and recurring knee pain, and it’s pretty clear Lopez is hurting.

Folks…we still have over 40 games left in a back-and-forth pennant race separated by 1 game from the Reds. We cannot continue like this. We MUST address third base.

Let me clarify. We don’t need an everyday third baseman. Sure, it would be nice, but we don’t have to have it. We just need a guy who can hit and play 3rd about 30 – 40% of the time…a guy who can spell Lopez a few games here and there and allow him to play a few games up the middle to maximize offensive potential in the right spot.

Lopez needs a break…and not just a one-time break…we need an ongoing solution at third that will allow him to take a few days off. At this pace, we’re running Lopez into the ground. His body is quickly approaching critical mass. And if we’re not careful, he could take this St. Louis lineup down with him when something blows.

Our offense will not continue at this rate. It’s not that I expect them to regress and return to the doldrums of offensive famine…but every offense, every hitter goes up and down. Over the course of 40 more games, our lineup WILL need a third baseman to produce. Flip can’t do it alone. Not now.

Mo needs to rescue him. He needs to either pick up a 3rd base option – Joe Crede? Ty Wigginton? – or he needs to make a decision on Allen Craig. Surely Craig can man the Hot Corner here and there in certain situations…right? I mean, with all this down time Craig is seeing, isn’t it possible to put him and Oquendo to work at third?

I won’t even mention the at-bats issue with Allen Craig – you know, the issue where limited at-bats tends to kill his RBI producing momentum?

Okay, okay…enough. It’s clear Mo needs to rescue Felipe Lopez from the slowly eroding situation at third base. The question is…will he?