Elijah Dukes is an Arrogant, Showboating @$$!

You know…I’m sure the guy has his good qualities, but he sure as hell wasn’t showing them last night. In the bottom of the 10th inning, after allowing the Cardinals to rally from a 7 – 0 deficit to take a 9 – 8 lead, the Nationals found themselves with a runner in scoring position and no outs. They were lucky enough to be facing a pitcher new to the closer’s role and one who had already pitched just hours earlier in the first half of a double-header. In steps Elijah Dukes.

Until this morning, I was unaware of just how extensive Dukes’ off the field problems had been. For your reading pleasure, I’ve posted a summary (from wikipedia.com) of his extracurricular activities below.

Since 1998, he has been arrested 6 times on charges including possession of marijuana, assault, and resisting an officer. On May 23rd 2007, it was reported that his wife filed a restraining order after he threatened to kill her. On June 12th, a 17-year-old foster child who was living in the care of a relative of Dukes accused him of impregnating her. Police say the sex was apparently consensual, and no crime was committed, but they are investigating. When the girl confronted Dukes, he allegedly got angry and threw a bottle of Gatorade at her.

Oh yeah…this is a guy I would be proud to have on MY team. No doubt about it. But that wasn’t even what ticked me off last night. Dukes steps to the plate with one on and no one out and promptly plants one in the center field seats to win the game 10 – 9. Good for him. Good clutch-hitting. And then he had to spoil it.

Upset with the home plate umpire for a called strike earlier in the at-bat, Dukes immediately turned to the umpire as he started his game-winning trot and pounded his chest while shouting some unheard comment. Disgusting. As if the umpire gives a hairy rat’s ass that Elijah Dukes thinks he’s an idiot. Again…see his track record above. I don’t really think he qualifies as a character witness. 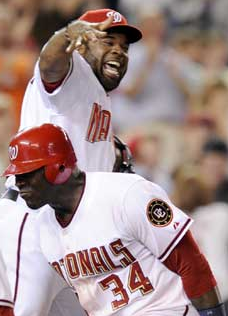 Then, as if the insulting chest-pounding wasn’t enough, the showboating jackass rounds third and begins strutting, posing, and all-in-all acting like an idiot (notice the “I’m a bad-ass Mo’ Fo'” face in the picture to the right). You would think a guy hitting .203 with one home run and a criminal record would have a bit of well-developed humility in there somewhere…but, I guess not.

I guess, when it’s all said and done, a true baseball fan has only one thing to say to such a ridiculous, shameful person and so-called “professional”…

Let me say it a different way…

I wonder how it felt to be Mr. Dukes when he got home that night and realized his team is one of the worst in the National League despite his disgusting antics…

Ah well…I guess I should let it go. After all, it’s only a matter of time before this guy is serving 25 to life, anyway…Grow up, Elijah…if not for yourself, at least do it for the rest of us. I just don’t know how much more of you I can stomach.

7 thoughts on “Elijah Dukes is an Arrogant, Showboating @$$!”